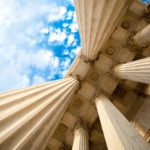 Legal Council is disappointed that by a 5-4 vote, the U.S. Supreme Court yesterday allowed the new public charge rule to go into effect in Illinois, rescinding the preliminary injunction we won in October.

We take courage in Justice Sotomayor’s strong dissent from this ruling that this is a temporary setback, not a foregone conclusion. We will fight for justice to prevail as this case proceeds.

In the fall of 2019, lawyers from Legal Council, working with Sidley Austin, Goldberg Kohn, and Shriver Center sued the Trump Administration on behalf of the Illinois Coalition for Immigrant and Refugee Rights and Cook County to halt the public charge rule. The public charge rule penalizes immigrants who have or may receive Medicaid in legal status decisions. We believe the federal government’s policy is illegal. In October 2019, Legal Council and our co-counsels obtained a preliminary injunction from a federal judge that enjoined application of the public charge rule in Illinois. After the Seventh Circuit Court of Appeals twice refused to lift the injunction, the federal government appealed to the Supreme Court last week.