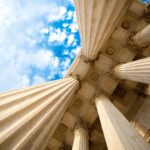 Legal Council for Health Justice’s client, the Illinois Coalition for Immigrant and Refugee Rights (ICIRR), today filed a motion with the United States Supreme Court urging the Court to temporarily suspend the Trump Administration’s public charge rule in light of the public health crisis and widespread economic insecurity created by the spread of the coronavirus disease (COVID-19). Through Legal Council, the Shriver Center, the Cook County State’s Attorney, and pro bono counsel, ICIRR and co-plaintiff Cook County joined the states of New York, Connecticut, and Vermont, and New York City, in seeking this relief.

The public charge rule threatens certain immigrants’ eligibility for green cards and visa renewals, which drives immigrants and their families away from accessing the food and health benefits they are entitled to receive. In October 2019, ICIRR and Cook County won an injunction to block the rule’s implementation in Illinois, which the Seventh Circuit upheld twice. But in February, over a strong dissent by Justice Sotomayor, the Supreme Court issued an order allowing the rule to take effect while legal challenges to the rule are pending. On February 26, 2020, the U.S. Court of Appeals for the Seventh Circuit heard oral argument on the Trump Administration’s appeal of the injunction. The matter remains pending.

Today, ICIRR and Cook County joined a coalition led by New York State to ask the Supreme Court to revisit their stay in light of the new and devastating effects that the rule has had on the nation’s public health and economy due to COVID-19. The coalition urges the Court to temporarily halt the public charge rule until the national pandemic is over, or to allow the district court to craft a new injunction tailored to the current public health emergency.

Legal Council for Health Justice uses the power of the law to secure dignity, opportunity, and well-being for people facing barriers due to illness and disability. All programs partner with health and hospital systems to train and support the care provider network, provide direct representation to referred patients, and conduct systemic advocacy to promote health equity among populations facing chronic, disabling, and stigmatizing health and social conditions. legalcouncil.org