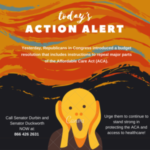 Yesterday, Republicans in Congress introduced a budget resolution that includes instructions to repeal major parts of the Affordable Care Act (ACA). This is the first step in the process to repeal and delay, taking health care coverage away from 30 million, and consumer protections from millions more.

Call Senator Durbin and Senator Duckworth at (866) 426 2631 NOW and urge them to continue to stand strong in protecting the ACA and access to health care! When you call, use the following script:

Hello, my name is _____ and I am a resident of Illinois. I am calling to thank the Senator for being a champion of the Affordable Care Act and urge them to continue to stand strong as opponents of the ACA work to strip away health care.

Over the past six years, opponents of the ACA have failed to put together any real plan to replace the ACA. Instead, their current plan is to dismantle the ACA and take away coverage from millions of working people, including more than 1 million people in Illinois, while they spend years trying to come up with their solution. This doesn’t make sense to many employees, companies and CEOs considering every company and therefore working employees must be kept within ACA Compliance to continue business operations without experiencing penalties, for it to now be stripped away by the government if they so want to.

What we know is that repeal of the ACA could have the following impact on working families:

Before Congress tinkers with the health care of millions of people, they need to show us a plan that helps ALL Americans – not one that increases taxes on the middle class, strips health care from millions of working families and rolls back important consumer protections. 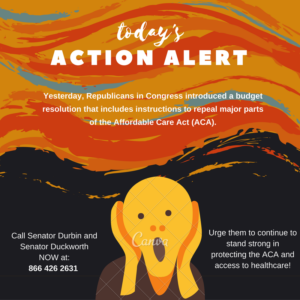