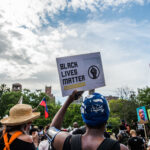 As the celebratory day of Juneteenth arrives, a historical moment has arrived with it. On June 17, President Biden signed a bill making Juneteenth a federal holiday. The same day, Governor Pritzker made Juneteenth an Illinois holiday.

Juneteenth celebrates Black freedom. As the United States declared freedom and independence on July 4, 1776, our Black population remained enslaved. It was not until June 19,1865, over 2 years after the Emancipation Proclamation was signed, that the last enslaved people in the U.S. were free.

Our laws have continued to uphold the legacy of slavery, actively harm Black communities and slow progress towards racial equity in countless ways. The stark disparities in health, wealth and representation that Black Americans still face today can be clearly traced back to the system of slavery and to anti-Black sentiments in American culture that have endured ever since. Today, Black Americans are 2.5 times as likely as white Americans to experience poverty, 5.4 times as likely to become incarcerated, and on average have about one-tenth of the wealth of white households. Through Legal Council’s health justice advocacy, we see firsthand the systemic racism that prevents so many Black Americans from reaching their full potential.

The effects of the systemic prevention of Black families from building wealth are still deeply felt today. Although the Fair Housing Act outlawed housing discrimination in 1968, by the time the law was passed, segregation had been deeply rooted across U.S. cities. Since Black Americans were largely prohibited from owning homes until then, they were unable to build generational wealth through home equity as white families did. As a result of these overtly anti-Black government policies, Black wealth is 5 to 7 percent as much as white wealth in the U.S., while Black incomes are 60 percent of white incomes. This dramatic difference points to a deeply entrenched wealth gap that will not be closed without intentionally mitigating past harm.

Without fail, wealth disparity translates into health disparity. For example, in Chicago, the legacy of redlining has concentrated poverty in certain areas of the city and compounded health inequities to the point that there is a 30-year gap in life expectancy between the Near North Side, a mostly white neighborhood, and Englewood, a mostly Black community just 9 miles away on the South Side. All over the United States, Black people are uninsured at higher rates than white people.

And the inequity doesn’t stop at access to care- Black Americans frequently face mistreatment and ignorance once they do access care. Myths about physical differences between races- such as the belief that Black people are less susceptible to pain– were originally used to justify slavery and still endure in the medical field today. In fact, the Association of American Medical Colleges found that half of medical students believe in at least one falsehood about physical differences between Black and white patients, and the effects are actively causing harm- Black patients are 22 percent less likely than white patients to receive any pain medication.

Another glaring example of health inequity is the maternal mortality crisis, which has disproportionately fallen on Black parents and children. Black birthing parents are at least 3 times as likely as their white counterparts to die from pregnancy. In Illinois, that rate goes up to 6 times as likely. This inequity stems both from the general disparities in access to care and the effects of the accumulation of experienced by an overwhelming amount of Black women in the U.S.

Incarceration and the unpaid labor loophole

While the 13th Amendment is credited with outlawing slavery, it made an exception for people convicted of crimes. This created a loophole for profits to be made off of unpaid labor, a fact that is still exploited today through unpaid prison labor. Since 1970, our incarcerated population has increased by 700 percent; and the racial disparities in this population are so severe that 1 in 3 Black boys born today can expect to go to prison in his lifetime, compared to 1 in 17 white boys.

The detrimental effects of an incarceration on an individual’s health are difficult to quantify. Each year in prison takes 2 years off an individual’s life expectancy– which means that mass incarceration has measurably shortened the overall U.S. life expectancy. And these effects don’t stop with the incarcerated person- a heavy toll is taken on their families and communities too. 63 percent of Black Americans have had an immediate family member in jail or prison, and 25 percent of Black children experience parental incarceration by age 14. Having an incarcerated family member leads to measurably worse physical, mental, and behavioral health outcomes, and these effects can reach entire communities.

As we finally see national recognition of this momentous day in our history, we must continue to interrogate the systems that were never designed to serve us all. Legal Council has seen the change that is possible through advocacy, both in individual lives and in our large-scale systems that affect countless people. When we get to the root cause of the issue, healing is possible. We must and will continue to push for true, honest, and restorative justice for Black Americans.