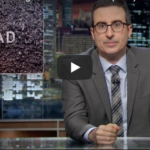 While we welcome the ‘John Oliver effect’ that shines a much-needed light on the issue of childhood lead poisoning, what’s repeatedly left unsaid in this and other highly-respected top-tier media outlets is the power and the value of a federally-mandated program available in every state — Early Intervention (also known as “E.I.”) — for infants and toddlers exposed to toxic levels of lead.

Below is an unpublished letter sent to The New York Times co-authored by the director of our Chicago Medical-Legal Partnership for Children program, Amy Zimmerman, and Anita Weinberg, clinical professor, Loyola University Chicago School of Law and Chair, Lead Safe Illinois which highlights the importance of Early Intervention:

Re: The Future for Flint’s Children (opinion page March 27)

Left out of the conversation about tackling childhood lead poisoning is access to Early Intervention services.   This is a troubling omission.  Dr. Hanna-Attisha’s opinion piece is an important reminder that despite lead exposure, tools exist to help children “not only recover, but thrive.” But Dr. Hanna-Attisha neglects highlighting Early Intervention as one of those tools.  And it’s key.

Early Intervention is available in every state through a federal program established under the Individuals with Disabilities Education Act (Part C).  It is effective at assisting parents to help young children develop and reinforce early literacy, executive functioning, and impulse control skills.  Until lead is eliminated, families need access to Early Intervention to help compensate for lead’s insidious reach.  Surprisingly, this critical program is glaringly absent from many state and local plans to address childhood lead poisoning.  While it can take years for the cognitive impact of lead poisoning to manifest, the time to act is now.  We know how to protect children from lead – remediation – and how to help those children harmed by lead – Early Intervention.